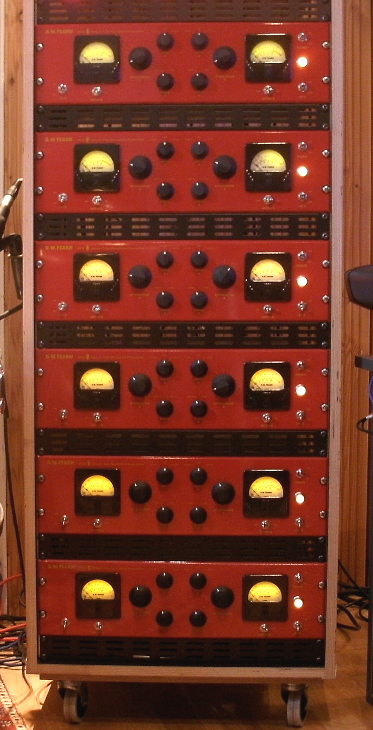 First I have to say that you guys build the best Pre-amps all over the Planet!!! I bought 4 Pieces of the VT-2 and they sound just amazing. I use them for mostly drum recording. The warm and glassy sound with 8 channels together is just great!!!! Keep up the great work!! A happy customer from Austria/ Europe with best wishes. (I think about getting 2 more of them.....) Didi Konzett

The Brauner VMA microphone in combination with the DW Fearn VT-1 pre-amp...I don't know what to say. Except our studio has moved up to a world class sound for recording vocals. When the next Therion album is released, you will be hearing magic in the sounds. Christofer Johnsson | Therion | www.megatherion.com

... in a word, the vt-2 is a killer. the best sounding, smoothest mic preamp i have ever auditioned. If you can afford one, buy it. Dr. Frederick J. Bashour | Pro Audio Review (Ausgabe Juli/August 1996)

We were doing percussion overdubs and had (2) AKG C-451s over the setup (congas, shaker, etc.). We switched from the Focusrite Red 1 to the VT-2 and then came the single most exhilerating moment in our careers. None of us (including the artist and the percussionist) have ever heard anything that sounded even close to the VT-2. It totally and completely blew away the Red 1. I could not believe the detail, depth, presence, warmth, and ‘bigness.’ It was as if the player was standing on the meter bridge. I expected to be impressed by the unit but I did not expect THAT!! In the 2 minutes it took to install it, our studio went from a solid project studio to the foundations of world-class. By the end of the session, the client had re-cut all the percussion with the VT-2 and booked additional time for re-cutting lead vocals and bass on 5 finished tracks. We're already making room for our second VT-2 as soon as the budget allows. Alan Mazzetti, Artifax Studio, Chadds Ford, PA